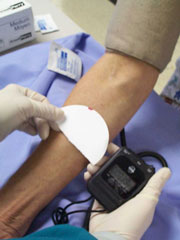 Bleeding time is a very popular blood test that is primarily used to gauge the speed with which the blood is able to clot.

The clotting of blood incorporates the functionality of a number of factors such as coagulation factors, platelets, as well as small vessel vasospasm. When vascular injury occurs, the first hemostatic response of the human body is primarily to generate spastic contractions of the vessels that have been lacerated. Once this has been accomplished, the platelets gather around the wall of the vessel where it has been damaged to help plug the hole that has been created as a result of the trauma. Excessive bleeding and blood loss takes place when these series of events do not occur in a normal fashion.  Bleeding time is therefore an essential medical test used to understand the amount of time blood would take to clot in a particular person.  Medical studies have shown that bleeding time will usually stay within the normal time frame if the patient’s platelet count exceeds 100,000 platelets per micro liter. Getting into further detail about the factors that influence the speed of clotting, the enzyme – thrombin, is required to and needs to be generated from the plasma precursor pro-thrombin. This then would convert any soluble fibrinogen into insoluble fibrinogen. As a result, the amount of time taken for a wound to clot can be directly linked to the amount of time taken for the generation of thrombin.

The primary purpose of a bleeding time test is to assess the overall response of platelets to injury, detecting the presence of any congenital or acquired blood disorders as well as to assess the functional capacity of vasoconstriction.

There are three methods of bleeding tests most widely used. The first one, the Duke’s method, requires small incisions to be made in the ear lobe with the help of a disposable lancet. The overseeing physician will attempt to blot the site every 30 seconds while also measuring the amount of time it takes for the bleeding to stop. In the Ivy method, the physician will wrap a blood pressure cuff around the upper part of the arm and inflate it to about 40. With the help of a small lancet, the physician will then make three small punctures in the arm and blot it every 30 seconds while gauging the amount of time it takes to clot. In the modified template method, the same procedure of using a blood pressure cuff and inflating it to 40 is performed, except that this time only two incisions will be made with the help of a spring loaded blade. Again, the site will be blotted every 30 seconds with the physician measuring the amount of time taken for clotting to occur.